RHEO is a microprocessor-controlled, prosthetic knee system that automatically adapts to an individual's walking style and environment. The manufacturer was desperate to solve their leaking seal problem so they posed their challenge to the top seal design firms in the US. Each company was to design a custom seal that would be tested under Federal testing regulations and required to meet a minimum of 1,000,000 test cycles without leaking. The company, who produced the longest lasting seals, exceeding the test requirements, would win the contract.

While analyzing the application, we determined that the most difficult aspect of the challenge was going to be sealing the viscous fluid that was filled with small metallic spheres that were magnetically programmed to function like the human leg while walking or running. These spheres were the key to the knees operation but posed an extremely difficult seal design challenge. In fact, it was apparent from our analysis and calculations that current seal design methodologies would not prevent the spheres from getting under the sealing lip. In a properly designed shaft seal, oil is pumped back and forth under the lip to reduce the rubbing friction. The pumping action is caused by both the micro asperities formed in the rubber by lip pressure and the varying film thickness under the lip. A meniscus is formed on the air side and if these spheres get between the lip and the sealing surface the seal will leak.

Our engineers decided to attempt something that had never been done before and manipulate the pumping force and lip force distribution pattern in a way that would lubricate the sealing lip while pumping spheres away from it.

Over the next 12 months, we experimented with hundreds of elastomeric formulations, flex thicknesses and lip force variations until we found one precise combination of material and design variables that worked perfectly. It lubricated the sealing lip and pumped spheres away from it. Clark Seals submitted samples for testing and won the contract as the only company to meet and exceed the minimum Federal testing requirements of 1,000,000 test cycles. 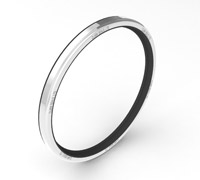 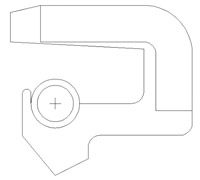 Industry for Use
Medical